The Story of Milton Hotels

Its all about the history by Ian Milton…

It started with a shoemaker who moved into the hotel business. Before the war my father was a shoemaker from Huntly in Aberdeenshire. He moved to the west coast and eventually acquired two small shoe shops in Fort William. My mother trained at the College of Domestic Science in Glasgow and ran a tea-room in Fort William.

When my father William Milton came back from the war he did not like being confined to working in a shop. So my parents started with a guest house and later bought the West End Hotel in Fort William.

My older brother, Alan, came back from training in the shoe business at Northampton to find we were now in hotels. He then trained with Clydesdale & Commonwealth Hotels to become a hotel manager. A few years later my father was quite seriously injured by a three-wheeled truck making a delivery and my mother asked Alan to come back and run the business.

Later we sold the West End Hotel to finance the construction of the new Milton Hotel on the outskirts of Fort William. This took about two years during which time I was at the Scottish Hotel School in Glasgow.

In 1965, I missed out on my third year at Hotel School to come back and help open the Milton Hotel in December, 1965. The Milton hotel opened with 42 bedrooms, which we extended in 1967 with 14 bedrooms and a ballroom.

A year later we built 60 budget rooms next to the hotel. I remember the building cost of this hotel, called the Milton Motor Inn, was only about £500 per room and we started offering accommodation at 99 pence per person per night in a twin room.  The Motor Inn was later completely remodeled and joined into the Milton Hotel taking it up to 120 rooms.

In 1970 we bought the 35 bedroom Alexandra Milton in Fort William. Over the years it increased in size to 97 bedrooms. The first move out of Fort William was to Oban buying the Caledonian Milton Hotel in 1972.

In the late 70’s we purchased the 42 bedroom Palace Hotel in Inverness and later we doubled the Palace to 88 rooms and in 2015 it became 89 rooms. We’ve been digging through the archives and come up a few stories about the Best Western Inverness Palace Milton Hotel & Spa.

From the 1970-90’s the group of 5 Milton Hotels saw many changes starting with the installation of bathrooms back in the 1970’s. Addition of bedrooms in the 1980’s and then a new Leisure Club & Pools in 2 Fort William and Inverness in mid to late 1990’s.

In 1991 we bought the Golden Lion Milton in Stirling, it had a great location in the city center and had 71 bedrooms with plenty of meeting room space.

As a company we have a philosophy of continuously trying to improve what we do. About this time we brought in a Sales Consultant, Derek Taylor, to help us improve our sales and marketing. Derek had been Sales Director at Grand Metropolitan when it started with three hotels and expanded to become a major hotel company. He has written about 8 books on the subject of Sales and Marketing in hotels. Derek worked with us for five years up to 1997 and greatly helped our marketing efforts.

To improve our interior design we sought help from a London designer, the late Bob Lush. Bob did the design work on the rebuilding of the Grand Hotel at Brighton, the Dorchester and the RAC club in London. He taught us how to raise the standard of the hotel building work we did with our own squad He also had a hand in the £1.3M upgrade of the Milton Hotel & Leisure Club in Fort William. A Leisure Club was also added in Inverness Palace Milton Hotel in 1998.

In January 2000 we re-located our Group Office and opened our new Sales Centre in Stirling and then in January, 2001, we opened a sales office in Glasgow.

During 1999 – 2001 much of our efforts was spent on building the brand new four-star Glasgow Milton Hotel and Leisure Club, Washington Street.  It opened with 129 bedrooms, 12 luxury apartments. 5 meeting rooms, swimming pool and Leisure Club on 16th October, 2001.

In 2002  we decided to change the direction of the company in August 2002 the Caledonian Hotel in Oban was sold followed by the Golden Lion in May 2003. The two original Fort William Hotels were sold in October 2003.

In April 2004 the Glasgow Milton joined the world’s largest consortium of hotels – Best Western, with the Inverness Palace following on in June. This has already provided to be an excellent partnership and a valuable new commercial business.  In 2005 we sold the Glasgow Milton Hotel & Leisure Club and focused our business efforts on the Best Western Palace Milton Hotel & Spa.

Since 2005 the Palace Milton Hotel & Spa has had the undivided attention and investment of Milton Hotels.  Developments have included:

Today this gem of a hotel is stands testament to a generation of investment.

The last few years have been very busy with key milestones of large bedroom refurbishment programmes, a new Brasserie and Bar, new Reception and Lounges to name just a few items.

Thank you for reading about Milton Hotels Limited.  We truly are a Scottish Hotel company and your stay will will be safe hands at the Best Western Palace Milton Hotel & Spa and Ten Town House at the Palace.

Come and be our guest and discover Highland hospitality first hand. 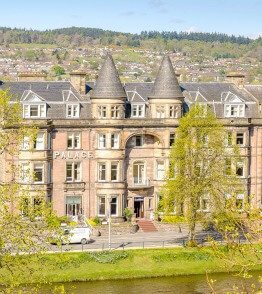 The Palace Hotel in 1958, Inverness has grown larger behind the hotel.

Relax by the Pool at the Palace

Looking for that perfect gift? Surprise your someone special with a lovely gift voucher.

Relax and stay connected with free Wi-Fi throughout the hotel.

By continuing to use the site, you agree to the use of cookies. more info